Facade plaster is the final layer of each façade, and it is the facade plaster that provides a pleasing and fresh look to a building, whether it be a residential unit orbusiness premises.

For this reason, the selection of facade plaster should be approached with special care and the obligatory help of an expert who shall point out its numerous technical characteristics and advantages.

Through this blog, we will try to bring you closer to some of the properties of facade plasters and point out their mutual differences depending on the composition, granulation, water repellency and vapour permeability. We will also introduce you to the terminology of “scratch” and “smooth” structures of facade plasters, and we will refer to the weather conditions under which it is desirable to apply facade plaster.

The type of facade plaster depends on the base from which it is made. There are five types of facade plasters. These are: 1) acrylic, 2) silicate, 3) silicone, 4) silicate-silicone and 5) mineral (lime-cement). The key difference between these plasters is in vapour permeability, elasticity, resistance to dirt, but also in the type of substrate on which they are applied.

It is important to note that the primer, thermal insulation board and decorative facade plaster must be mutually harmonized according to their vapour permeability characteristics.

Acrylic facade plaster is mostly used in our construction industry for the facades of family houses and other buildings. It is used in 60% to 80% of cases in domestic practice when the contact facade is made of styrofoam.

Regarding silicate, silicone or silicate-silicone plasters, they are applied on contact facades when stone wool is used as a thermal insulation board. If the facade is made of thermal blocks or the facade is a “sandwich wall”, facade plasters based on silicate or mineral-based facade plasters are recommended.

From the aspect of technical characteristics, there are no crucial differences between facade plasters of different granulations. The key differentiation is in the process of construction and the consumption of materials, i.e. the price.

The most common granulation used is granulation to 1.5 mm, which implies the best ratio of price, consumption and quality. High shear granulations to 2.5 or 3.0 mm are easier to install and better conceal unevenness on the facade. Higher grain granulation requires higher material consumption (kg/m2). Furthermore, higher granulation, due to its roughness, gets dirty faster.

Regarding aesthetics, higher granulation of decorative facade plaster (2.0 mm) results in a rougher and rustic appearance of the facade, while finer granulation (1.0 mm) achieves the effect of an extremely smooth surface.

As for the colour palette, facade plasters can be tinted in a wide range of shades. It is recommended to use lighter tones on the facade. There are rational reasons for this. Darker colours absorb more heat energy than lighter colours. Consequently, this can cause significant stresses in the facade plaster during heating and cooling, which may result in the creation of cracks on the facade.

Therefore, when choosing a facade plaster, you should keep track of the value of light intensity, which is denoted by “Y” and expressed on the tone chart of the manufacturer.

Facade plaster can have two basic structures. These are: 1) “ribbed” or “scratched” surface and 2) “full” or “smoothed” surface and the choice of one or another structure depends on personal aesthetic preferences.

It is important to know that a difference in structure does not mean a difference in quality. Hence, “ribbed” and “full” facade plaster have the same characteristics listed in the technical data sheet of the manufacturer. The key difference is in the appearance of the surface — the “ribbed” structure is rougher than the “full” structure, which is smooth.

Achieving the desired structure is done during the execution of facade works, while the facade plaster is not yet completely dried. A metal or plastic trowel is used for this facade technique. 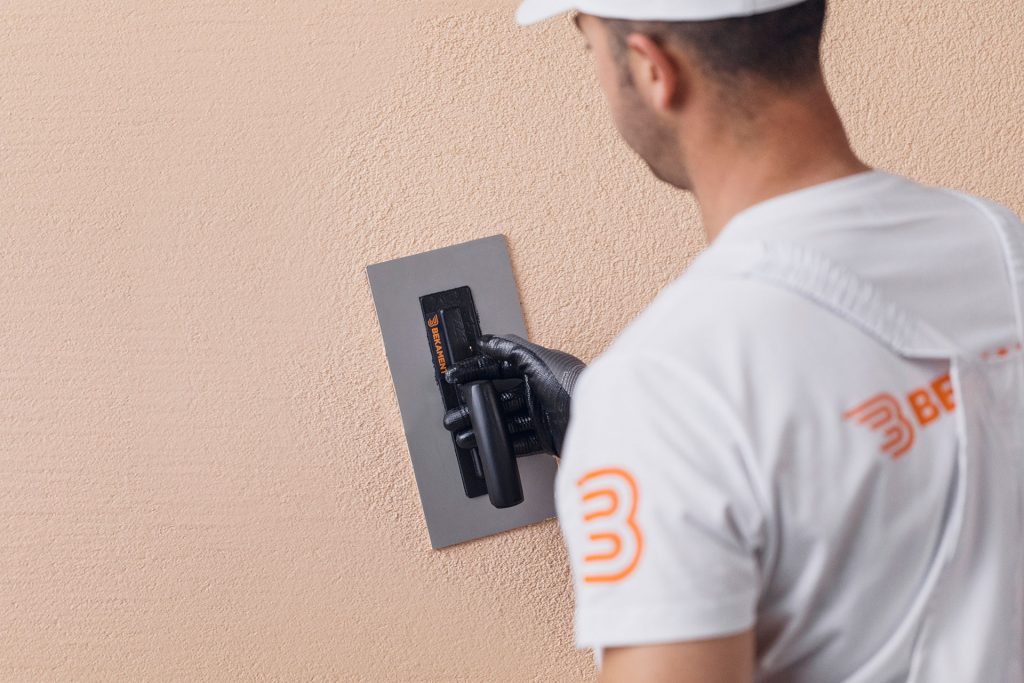 Water and vapour are the most common causes of damage to the facade. Water repellency is the ability of a material not to absorb water in all its aggregate states (rain, snow or frost), therefore preventing its penetration into other layers of the facade system.

On the other hand, vapour permeability is the ability of a material to release vapour from the inside of a space, in the direction “from the inside towards the outside”. This factor allows the facade to “breathe”. When the vapour permeability is at a high level, there is no condensation of moisture in spaces, and therefore, there are no conditions for the formation of mould on walls, which allows for a healthy and quality microclimate.

When is the right time to install facade plasters?

Installation of facade plaster is recommended in early spring or late autumn when the weather working conditions are optimal.

Extreme weather conditions, such as high humidity, direct sunlight, rain, strong winds and low temperatures, can significantly extend the setting time of the plaster. In such conditions, its installation is not recommended because the final facade layer may dry too quickly, soak in water or fall off the wall.

In the summer months, it is recommendable to install facade plaster either in the early morning or in the late afternoon when the temperature ranges from +5°C to +30°C on the side of the building that is in the shade.

For more detailed information, it is recommended that you consult an expert from the Technical Support sector of the Bekament company to obtain all the necessary information for the technically correct application of the final facade plaster within the frame of the thermal insulation facade system that is being installed.

Which products should you choose?

The BEKAMENT company, as a regional leader in the production of finishing materials in the construction of the highest quality, offers a wide range of finishing facade plasters that are part of the Bekatherm portfolio of high-quality products for exterior walls and thermal insulation.

Furthermore, facade plasters also represent one of the components of thermal insulation facade systems that are offered within the given category, which provide long-term and reliable protection of business and residential buildings. The energy efficiency of the Bekatherm system reduces costs and has a positive impact on the environment, and the top quality, confirmed by the ETA certificate, provides up to 25 years of warranty.

You can find out more about the entire product range of the Bekatherm category and the characteristics of thermal insulation system solutions at https://www.bekament.com/bekatherm/#,and you can also watch the educational video material (tutorial) which, in a practical way, portrays the procedure of proper installation of thermal insulation, that is, professional application of each individual component of the system solution, products and tools used during the process.

As for the offer of Bekatherm facade plasters, in the following text you can get acquainted with the characteristics of some of them as well as their formulation which implies different bases::

BK-Plast is an acrylic-based facade plaster. This plaster has no odour, dries quickly and is easy to wash. It is characterized by good adhesion to the substrate and excellent workability. It is a material of high strength and water repellency. The structure of the plaster can be “ribbed” (scratched) or “full” (smoothed). 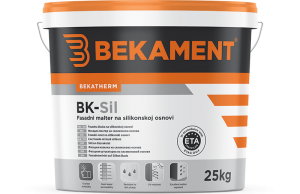 BK-Sil is a silicone-based facade plaster. It is a material of high vapour permeability and excellent workability. The silicone composition provides it with extremely good water repellency. It is resistant to UV radiation and atmospheric influences. Most importantly, this type of facade plaster can be tinted in more than 1,300 shades from the tone chart. 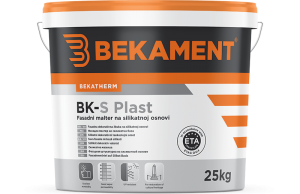 BK-S PLAST is a silicate-based facade plaster. Plasters of this type are installed at a temperature ranging from +15°C to +30°C. This material is characterized by good vapour permeability and excellent water repellency as well as resistance to UV radiation. Due to its advanced properties, it is recommended when renovating old buildings or plastering the facade of thermal blocks or sandwich walls. It can be tinted in more than 1,300 shades. 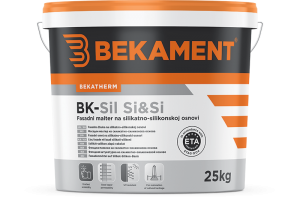 BK-Sil Si&Si is a silicate-silicone-based facade plaster.Due to its characteristics, it is recommended when renovating old buildings or in a situation when the thermal insulation plate of the contact facade is made of stone wool. Silicone additives increase its water repellency. It can be tinted in more than 1,300 shades. Due to its properties, it is installed at a temperature ranging from +15°C to +30°C.

BK-Briv Special is a mineral thin-layer facade plaster on a lime-cement basis intended for the protection and decoration of external facade surfaces. It is characterized by good adhesion to the substrate, exceptional workability, high strength and good vapour permeability as well as resistance to the formation of small algae and mould. It is produced in white colour and it can be overpainted with facade paints on acrylic or silicate base, in pastel shades. Due to its properties, it is installed at a temperature ranging from +5°C to + 30°C.

We invite you to share on our social networks Facebook/Instagram what, in your opinion, are the advantages of a quality facade?