On that occasion, a press conference was held at the Bekament Administration Building, where most of the senior team of the Aranđelovac Super League were greeted by the owners of the company, Dejan and Aleksandar Čolović

Apart from the continuation of cooperation between these two business and sports brands, the participants at the conference also discussed the beginning of a new handball season for the Aranđelovac Super League participant, and the idea of ​​including a handball club in the campaign “With Heart for the Future” in which funds were being raised for the reconstruction of the General Hospital in Aranđelovac, the founder and initiator of which was Bekament Foundation.

Most of the senior team and professional staff presented the host with gifts, two replicas of last season’s jerseys in which Bekament handball female players won the Serbian Cup and the Vice-Champion title, announcing that the girls would try to maintain the level of good results and games in the next season.

Dejan Čolović congratulated the female handball players on the winning trophy the year, noting that although, unfortunately, the economy had no particular interest in investing in sports, Bekament had allocated certain financial resources for sports and that sports was something that drives society in a positive direction. Dejan said that the Company supported the team because the team was mostly made up of girls from the town and because a large number of young people training not only in this club, but also in other clubs the Company supported did not spend their free time exclusively in front of computer screens, tablets and mobile phones, but in sports fields where, in addition to better health, some future generations would also be acquiring some good habits…

Aleksandar Čolović expressed his hope that the team would be better as regards the results in the next season, inviting other businessmen in the town under Bukulja Mountain to get involved in financing the sport. He also mentioned that in addition to handball club, Bekament also supported the operations of of the FC Banja (Sumadija District League), from the place where the Company operated, but also participated in the financing of other sports clubs in the town, by which action children “were removed from the street”, and that working in clubs new generation acquired work habits, which would later mean a lot to them in life, when they would be performing some other tasks in the society.

A part of today’s press conference was also dedicated to the promotion of the campaign “With Heart for the Future” of the Bekament Foundation, which together with businessmen from Aranđelovac, the Municipality of Aranđelovac and its fellow citizens was raising funds for the reconstruction of Aranđelovac General Hospital. So far, mostly businessmen and the municipality, said Dejan Čolović, had raised about 50 million dinars, which would be enough for a new, upgraded part of the Polyclinic, but in the coming period the idea would be that the entire hospital should be completely reconstructed, which would provide better healthcare services to the inhabitants of this and the surrounding towns.

It was pointed out that the response of citizens was unfortunately low despite the distribution of 25.000 flyers aimed at informing fellow citizens that sending SMS worth of RSD 100 to the number 1678 could not only help themselves but to their future generations.
After the presentation by Dejan Čolović, former national team member Sanja Rajović spoke, who communicated the decision of the players and their professional staff to join the campaign “With Heart for the Future” by all of them giving up the monetary part of the prize for winning Serbian Cup the season before and that RSD 50.000,00 dinars would be paid into the fundraising account over the next few days, as a small contribution of the team to the campaign conducted by the Bekament Foundation.

ZvonkoPaunović, the first coach of the senior team, thanked the host for its hospitality and support, mentioned that along with the Municipality of Aranđelovac some companies from the town helped the club as well, mentioning the brand Aqua Viva of the company “Knjaz Miloš”, carrier “Gavrilović transportation”, as well as “Fortuna market” and “Slatkosrce”, which in accordance with their capabilities supported the club, announced the assistance of some new friends in the coming period, such as the brand “Mojakafica” from Kruševac, which he expected to become part of the FHC Bekament Bukovička Banja.
Paunović said that the team was ready for the start of the season, which the professional staff, players, club management and fans expected to start on Friday at 19:00h, when Belgrade Junior, one of his team’s last season “debtors” was to arrive in Aranđelovac. The responsibility, said Paunović, to achieve a good result in the next season was not only conditioned by the quality of the girls who played in the club and the reputation and history of the club, but also by the fact that the Municipality and the company, such as Bekament, allocated considerable funds to them, as well as the fact that in addition to the 20th jubilee of the competitive season in “Superica”, Bekament Bukovička Banja would mark the half century of the existence of women’s handball in the town at the foot of Bukulja Mountain next year.

At the end of the press conference, together with appropriate photos of the girls and the host, new club jerseys of Užice sports equipment manufacturer “Ardu sport” were presented, in which Bekament Bukovička Banja would play in the Super League and the Serbian Cup.

In the presence of Serbian Deputy Prime Minister, Minister of Interior, NebojšaStefanović, Bekament opened new facilities for the production of powder materials and a liquid products as well as a fully automated warehouse within its factory complex in Aranđelovac. 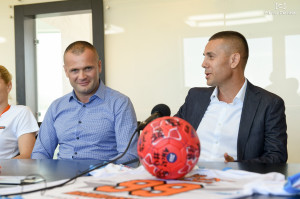 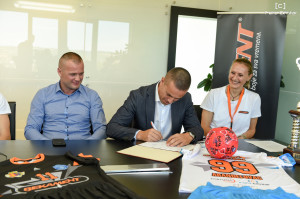 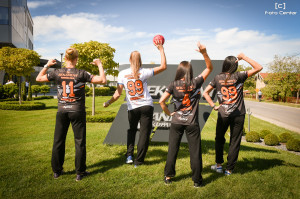